Historical Background of Baltit Fort-Hunza
In olden times a number of small independent states existed in the history of Northern Areas of Pakistan. Among them Hunza and Nager were the traditional rival states, situated on opposite sides of the Hunza (kanjut) river. The rulers of these two states, known as Thámo / Mirs (Thάm=S), built various strongholds to express their power.
According to historical sources {Ref: Tarikh-e-Ehd Atiiq Riyasat Hunza by Haji Qudratullah Baig, Pub: S.T.Printers Rawalpindi 1980 Pakistan}, the Hunza rulers initially resided in the Altit Fort, but later as a result of a conflict between the two sons of the ruler Sultan, Shah Abbas (Shάboos) and Ali Khan (Aliqhάn), Shaboos shifted to the Baltit Fort, making it the capital seat of Hunza. The power struggle between the two brothers eventually resulted in the death of younger one, and so Baltit Fort further established itself as the prime seat of power in the Hunza state. 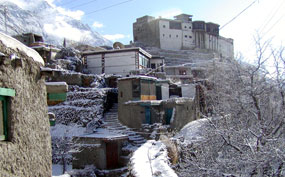 Hunza Baltit Fort During Winter 2006
The rich beauty of Baltit Fort can be traced to over seven hundred 700 years ago. Ayasho II, Tham / Mir of Hunza in the early 15th fifteenth century married Princess Shah Khatoon (Sha Qhatun) from Baltistan (In Moghul history Baltistan is called Tibet Khurd mean, little Tibet), and was the first to modify the face of Altit and, subsequently Baltit Fort. Baltistan meaning land of Balti people had a very strong cultural and ethnical relation with the Ladakh territory of India then. Consequently, the structure of Baltit Fort was influenced by the Ladakhi / Tibetan architecture, with some resemblance to the Potala palace in Lahasa. Then additions, renovations and changes to the building were being made through the centuries by the long line of rulers of the Hunza that followed.
A veritable treasure house for ancient forts, the Northern Areas of Pakistan lost most of its glorious built heritage around the 19th century as a result of the destructive attacks by the Maharja of Kashmir. 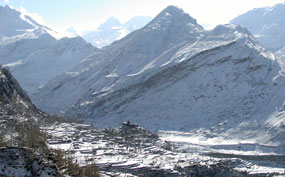 Altit Village & Fort, January 2006
However, in this regard people of Hunza were exceptionally fortunate to successfully defend against the invasions of Maharaja Kashmir four times.
{Ref: Tribes of Hindoo Koosh by John Biddulph Chapter: II Page: 29, Pub: The Superintendent of Government Printing-Calcutta India 1880, Reprint: Ali Kamran Publishers, Lahore-Pakistan 1995. First attack 1848, 2nd attack: 1865, 3rd attack 1866 and 4rth attack 1888
One of the biggest changes in the structure of Baltit Fort came with the invasion of British in December 1891. Tham / Mir Safdarali Khan, ruler of Hunza his wazir Dadu (Thara Baig III), fled to Kashgar (China) for political asylum with their fellows and families. With the conquest of Hunza and Nager states by the British forces in December 1891, the fortified wall and watch towers of the old Baltit village and watch towers of the Baltit Fort on its north-western end were also demolished as desired by the British authorities. 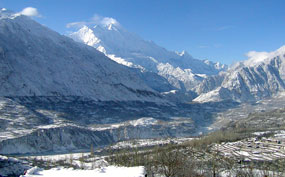 Hunza & Nager with the backdrop of Rakaposhi 7788 meter, January 2006
The British installed his younger brother Tham / Mir Sir Muhammad Nazim Khan K.C.I.E, as the ruler of Hunza state in September 1892 {Ref: History of Northern Areas of Pakistan by Prof. A.H.Dani, Page:285 Pub: Sang-e-Meel Publications, Lahore Pakistan www.sang-e-meel.com, Reprinted: 2007}.
During his reign, Tham / Mir Nazeem Khan made several major alterations to the Baltit Fort. He demolished a number of rooms of third floor and added a few rooms in the British colonial style on the front elevation, using lime wash and colour glass panel windows.Baltit Fort remained officially inhabited until 1945, when the last ruler of Hunza, Mir Muhammad Jmamal Khan, moved to a new palace further down the hill, where the present Mir of Hunza Mir Ghazanfar Ali Khan (Current Chief Executive of Northern Areas) and his family are residing.
With no proper authority entrusted to care for it, the Fort was exposed to the ravages of time and over the years its structure weakened and began to deteriorate. His Highness Aga Khan IV initiated the restoration efforts for Baltit Fort in 1990, when Mir Ghazanfar Ali Khan the son of last ruler of Hunza, Tham / Mir Muhammad Jamal Khan and his family generously donated the Fort to the Baltit Heritage Trust, a public charity formed for the explicit purpose of owning and maintaining the Fort.
Sir Mir Muhammad Nazim Khan K.C.I.E & Khan Bahadur Wazir  Humayun Baig Dehli Darbar 1911 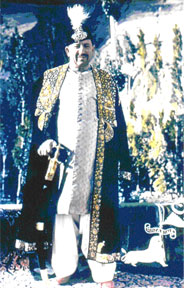 Mir Mohd Jamal Khan (d. 1976)
The restoration undertaken by the Aga Khan Trust for Culture in Geneva in association with the Aga Khan Cultural Service Pakistan (Pakistan), took six years to complete.
The project was supported by the Aga Khan Trust for Culture as the main donor through its Historic Cities Support Programme, as well as by the Getty Grant Program (USA), NORAD (Norway) and the French Government.  The restored Fort, resplendent in its regal glory was inaugurated on September 29, 1996 in the presence of His Highness the Aga Khan IV and the president of Pakistan Farooq Ahmad Khan Laghari. It is now operated and maintained by the Baltit Heritage Trust and is open to visitors. Preservation at its best, the Baltit Fort serves as a perfect example of culture restored and preserved for the future generations of the mountain people.
Posted by azeem at 13:38